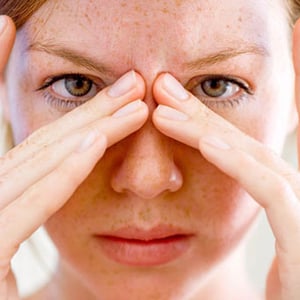 Then again, a lot of patients come into my office believing they’ve got sinusitis when in fact they don’t. They complain of a severe headache, thinking that indicates sinusitis. Often the headache is diagnosed to be stress related or even a migraine headache, not sinusitis at all.

Understanding how the sinuses work can help you identify if you’ve got sinusitis.

Sinuses are air-filled cavities that empty into the nose. They surround the eyes and cover the front of your face. Some of the theories as to why we have sinuses are that they help absorb trauma to the face and act as a cushion to the brain, add resonance to the voice, and secrete fluid to keep the nose clear.

When sinuses don’t work well, they produce a lot of symptoms.

People with a predisposition to sinusitis include those with anatomical problems, like a deviated septum. The septum divides the nose into two halves. If it is bent, either through an injury to the nose, or simply because that’s the way it developed, the bend can block the area in the nose where the sinuses drain. In that case, surgery to move the septum back to the middle of the nose will help to open the sinuses permanently.

Allergies and irritants including pollution and cigarette smoke can cause chronic congestion or stuffiness which can lead to sinusitis. Children are less likely to develop sinusitis than adults.

So can a severe cold.

Recent findings have shown that sinus disease is not a disease of the sinuses themselves in the great majority of patients. Rather, sinus disease occurs because of a problem with the sinus openings.

The sinuses drain into the nose through narrow openings. Anything that causes swelling in these openings—such as a cold or allergies—can swell the openings shut. Once these openings are closed, mucous produced in the sinuses cannot drain and become stagnant. That can put you at risk for developing sinusitis.

Typically, when someone gets the flu or a cold, they have symptoms of congestion and a runny nose lasting two to three days. Then they begin to feel better. When sinusitis develops, they begin to feel worse on days four, five, six or seven. However, this time the symptoms are much more specific, i.e. tenderness just under the left eye (or right eye) and the nasal discharge turns from clear to yellow to green.

To proactively avoid sinusitis when you’ve got a cold, take an over-the-counter decongestant and keep well hydrated so that nasal secretions stay thin and drain optimally. It’s important to limit your use of topical decongestant sprays to no more than three days because of the addictive nature of topical sprays.

Sixty to 70 percent of people who suffer from the flu or a cold recover without the need for antibiotics. Those who don’t get better require treatment.

Endoscopic sinus surgery is a relatively new concept that has dramatically changed the way we treat sinus disease. We are now able to take care of many people with persistent sinus disease—people that we could do little for in the past.

Jeffrey Raval, MD is a graduate of the University of Michigan Medical School and did his residency and internship at the Department of Otolaryngology at Washington University Barnes Jewish Hospital. He completed his fellowship in Facial Plastic and Reconstructive Surgery in the Department of Otolaryngology, is double board certified by the American Board of Facial Plastic Surgery and Otolaryngology/Head and Neck Surgery. He is Section Head of Otolaryngology at Swedish Hospital in Englewood and maintains his practices – Raval Facial Aesthetics and Rocky Mountain Laser Aesthetics – in Denver’s Cherry Creek North District.